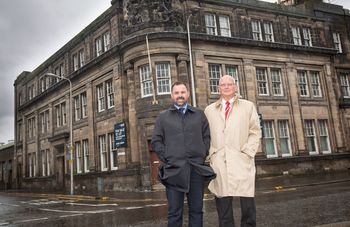 Dundee based McGill Homes have today, announced the purchase of the former Department for Work and Pensions building on Dock Street, Dundee in a deal worth over £500,000, and revealed their intentions to convert the Grade B listed building into residential properties (subject to planning approval).

The purchase, which is the first major acquisition since the company announced plans to revive McGill Homes earlier in the week and confirms the refocus of the Homes business on commercial to residential conversion projects.

“We are excited to make this acquisition and announcement, which will confirm our intent to refocus McGill Homes on conversions rather than new builds. We looked at the site a number of months ago, and it is the perfect project for our business. Although McGill works across the country, it is great to announce our first major development in Dundee, and be part of the continued re-development of our waterfront”

The purchase of the building by McGill Homes, part of the newly formed McGill group of companies, with plans set to be submitted to Dundee City Council over the coming weeks.

“The project will convert the existing commercial property into residential units and work has already started to set out our plans for the development. It is a fantastic site in a prominent waterfront location and our development will maintain the stunning features of the building.

“These types of conversions are a typical development for McGill Homes and we are already in discussion to acquire similar development sites both in the city and around the country.”

The £515,000 site purchase confirms the commitment by the new owners to move the Homes business in a different direction and highlights their vision of growing McGill into one of the leading construction companies in the UK.

The 17,000 sq. ft. site sits on the corner of Gellatly Street and Dock Street in Dundee’s waterfront campus which is currently going through a £1billion redevelopment and includes the new V&A Dundee Museum.

Want to join the discussion?
Feel free to contribute!